Jeremy Corbyn has set out plans that could see high-earners having to wear cloth caps at work.


Addressing a gathering of his supporters from the business community today, he told the two falafel-stall holders that "no one takes a person in a cloth cap seriously".


While wearing a cloth cap, the Leader of the Opposition argued that forcing the super rich to wear cloth caps would "turn them into the figures of ridicule, the targets of vitriol, that we believe they should be in the kinder, more decent society we hope to create."


The Labour Leader's remarks come just days after he was reported to have proposed a cap on maximum earnings.


"We are used to this kind of post-truth misreporting by the mainstream media," a spokesman explained.


"The idea that Jeremy would propose an outdated Cuba-style unworkable economic policy – although understandable - is in this case mistaken."


"However", the aide added, "given that Jeremy considers money to be the root of all evil, the suggestion that we might stop people from earning it is not without merit".


The policy has been criticized by economists who argue that it could lead to an exodus of talented individuals with very big hair.


It is also unclear whether footballers would have to wear the cloth cap under Corbyn's policy. Arsene Wenger, manager at Corbyn's favourite team Arsenal, has said he would challenge the policy if it came to it. He added that while he would personally never agree to wear the cloth cap, he might compromise on a beret.
Posted by Theedgeofwhere at 03:34 1 comment:

Two poems for the morning after Brexit

1.
The day the elderly f*cked us
was a Thursday
and on the Friday
we awoke to what had happened.
They'd given our inheritance
to a box
already bursting
with its lies and its mistrust and wasted life.
Dear Grandparents,
your alzheimers
won't prevent us
from recalling that dark night
2.
Will the anger leave
when that line still snakes
the waiting remains
and the faceless distant aren't there to blame.
Where now will their anger go?
Where will their jabbing finger point?

Posted by Theedgeofwhere at 02:25 No comments:

When I was a student I often wrote notes on facebook. I guess I had more time.

It was like my blog before I had this blog.

Well, one of the notes I wrote was all about... Jeremy Corbyn!

It was 2009, and Jeremy was an irrelevant backbencher who garnered little interest. Seriously: my note only got a single like, and that was from me.

I thought I'd deleted all those old notes and lost to the ether anything I hadn't transferred to this blog.

Turns out I was wrong. Searching my computer I found a word document that had them all - so here's the note about Jeremy. But first, I'd like to point out that I was totally ahead of the zeitgeist here, writing about Jeremy long before it became fashionable.


Me and Jeremy Corbyn MP
Share
Thursday, January 22, 2009 at 11:22pm | Edit Note | Delete
This evening Jeremy Corbyn, MP for Islington North, came to speak to the Oxford University Labour Club about the recent conflict in Gaza. It was a pretty decent talk, for the most part. But at the end I couldn't resist going up to him and asking a cheeky question.


Me to Jeremy Corbyn:
“Thank you for your talk, I really enjoyed it. I just wanted to ask: how come Zionists have such a stranglehold on Labour politics? I mean, take James Purnell for example – he went from being in LFI to a ministerial position. How do they have such control?”

Corbyn won the 2001 Beard of the Year award, after having described his beard as "a form of dissent" against New Labour.
Written about 5 months ago · Comment · LikeUnlike

Some thoughts on Brexit

Some thoughts on Brexit…
"At a minimum, the EU would allow full access to its single market only in return for adherence to rules that Eurosceptics are keen to jettison. If Norway and Switzerland (whose arrangements with the EU many Brexiters idolise) are a guide, the union would also demand the free movement of people and a big payment to its budget before allowing unfettered access to the market.
Worse, the EU would have a strong incentive to impose a harsh settlement to discourage other countries from leaving. The Brexit camp’s claim that Europe needs Britain more than the other way round is fanciful: the EU takes almost half Britain’s exports, whereas Britain takes less than 10% of the EU’s; and the British trade deficit is mostly with the Germans and Spanish, not with the other 25 countries that would have to agree on a new trade deal."
This briefing gives more detail: http://www.economist.com/news/briefing/21693568-david-cameron-will-struggle-win-referendum-britains-eu-membership-if-he-loses

Posted by Theedgeofwhere at 03:02 No comments:

For the overwhelming majority of people this blog post is completely superfluous. They read the newspapers, consider the last election result or think about the 1980s and the fact that Corbyn won’t win an election is obvious. But for the small group that continue to clamour for Corbyn – I hope to change your mind. Here’s why the arguments in his favour don’t stack up.

Pro-Corbyn argument number 2
Disillusion with a Westminster elite who are all too similar has fuelled the rise of UKIP. UKIP votes were a protest vote for people who wanted something different. Corbyn is different. He will win back the their votes.

Pro-Corbyn argument number 3
Corbyn is brave. He has the confidence to speak to terrorists to promote peace. He has been unfairly attacked in the press for calling them friends, but that’s just how he speaks to people. If peace is to come we need leaders like him, who will do dialogue with terrorists.

Pro-Corbyn argument number 4
What about all those people who didn’t vote? They didn’t vote because all the main parties are too similar. Corbyn is different. They’ll vote for him.


Posted by Theedgeofwhere at 23:14 No comments:

deeply flawed. And it seems the experts agree...

Some quotes on the CAA's anti-Semitism survey

1.    Social Scientist Dr Keith Kahn-Harris - it was ‘methodologically invalid. There can be no confidence in its representativeness.’

2.     Jonathan Boyd, Director of Jewish Policy Research – ‘They haven’t done some key and fairly basic parts of the process.’

3.     Dr Michael Pinto Duschnisky – ‘These figures are not to be trusted’

4.     Jewish Policy Research statement – ‘The organisation’s survey about antisemitism is littered with flaws, and in the context of a clear need for accurate data on this topic, its work may even be rather irresponsible… quite basic methodological flaws and weaknesses

Posted by Theedgeofwhere at 01:47 No comments:

The logical leaps of Gilad Atzmon.

It's a letter from the Israeli ambassador to Nick Clegg, voicing concerns about David Ward MP. For Atzmon, such a letter prompts the question 'Is Britain still a sovereign country? - as he's written at the bottom of the page.

Quite a logical leap that. Not really sure how he gets from an ambassador's letter to Britain lacking sovereignty, unless - like classical anti-semites - it's because he chooses to see sinister Jewish control wherever he looks. (Although he'd probably protest that he was merely being anti-Israel...). 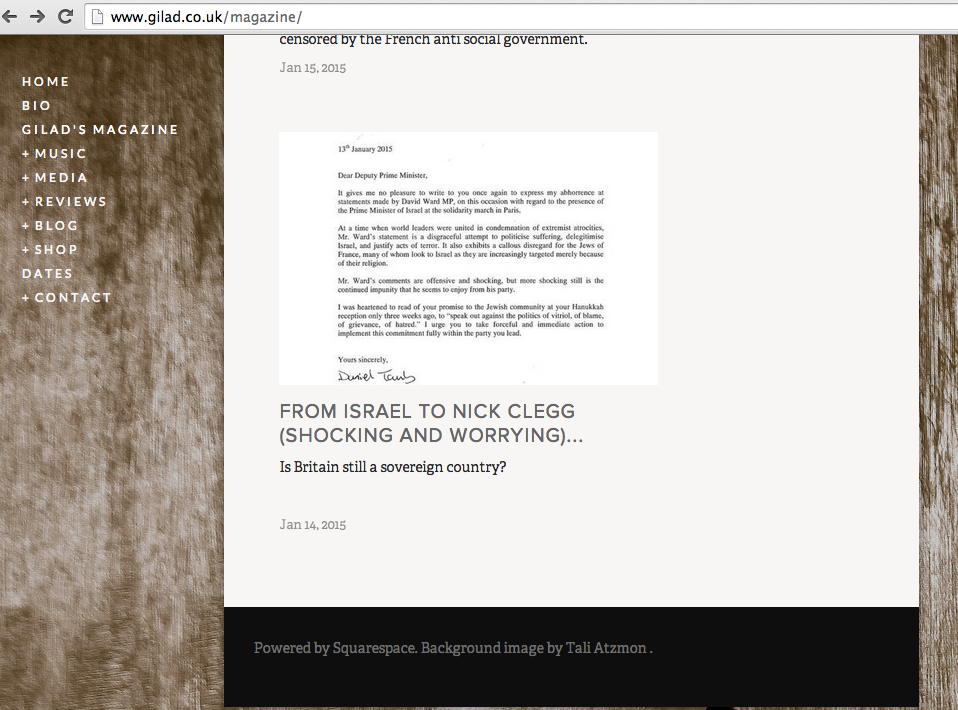 Posted by Theedgeofwhere at 07:12 No comments:

The Campaign Against Anti-Semitism - Asking the questions you need to get the answers you ought not to want...

Jewish life in Britain is vibrant, flourishing, and unashamedly public. We have our own book festival and food festival, our own newspapers and magazines. More children go to Jewish schools than ever before. Jewish youth movements take hundreds of children on summer camps each year. At Christmas each year, hundreds of Jews go to a conference, Limmud, to discuss and celebrate Jewish life. As the Jewish Policy Research (JPR) concluded after conducting a survey on anti-Semitism:

“…compared with other Jewish populations in Europe, Jews in the United Kingdom generally experience less anti-Semitism and are less worried about it. There is evidence to indicate that most British Jews feel fully integrated into British society, and that discrimination against Jews is largely a thing of the past”

The JPRs findings were published in July. Yet now a survey by the Campaign for Anti-Semitism (CAA) – a grassroots organisation of activists – claims that over half of British Jews see no future in the UK. And this finding has been making headlines.

It seems too bad to be true – and that’s probably because it isn’t true.

In fact the CAA’s survey had two parts. The first, in conjunction with Yougov, examined non-Jewish attitudes towards Jews in Britain. That part wasn’t too bad, although I’d take issue with a couple of things. For example, according to that survey, not wanting a family member to marry a Jew is anti-Semitic. But that logic would surely cast as racist any Jew who opposes a family member marrying out – something I suspect many British Jews feel.

The second CAA survey, of UK Jews perceptions of anti-Semitism, was deeply flawed. Firstly, it fell foul of selection bias, where the method of selecting respondents biases the ultimate findings. I completed the survey after finding it on the CAA's facebook page – and I suspect many other people will have found it in similar ways. People who are looking on websites about anti-Semitism are clearly going to be more likely to consider anti-Semitism to be a big issue, thereby distorting the results.

Secondly, the survey asked questions that were laden with assumptions and extremely leading. For example, ‘Media bias against Israel fuels persecution of Jews in Britain’ – a question that presupposes the existence of anti-Israel bias.

Finally, the report shows no record of which respondents said what. Is there a difference in the responses of respondents depending on how they learnt of the report? Without more data about the backgrounds of the respondents, it’s very difficult to properly analyse the results.

Most problematic, in my view, is the odious suggestion that the current experience of anti-Semitism in Britain ‘has echoes of the 1930s’. According to CAA, that’s what over half of UK Jews think. Really? Is our community really that lacking in perspective? 1930s anti-Semitism was state sponsored and quotidian. Modern anti-Semitism is challenged by the state and – as evidenced by the JPR’s data on how frequently people actually experience anti-Semitism – is thankfully rare.

The authors of the CAA survey report purport to convey a community living in fear. But through the hyperbolic headlines they have prompted they are guilty of contributing towards the very climate of fear about which they claim to be so concerned.
Posted by Theedgeofwhere at 02:57 No comments:

The best of the edge of where?